Hearing and Responding to God

Chapel is a time set apart from the hectic nature of daily school life that allows faculty and students to come together for a time of biblical teaching, religious contemplation, and corporate worship. Pastors, community leaders, faculty members, and fellow students are invited to address the community. The student chapel bands also lead the group in singing contemporary worship songs and traditional hymns. 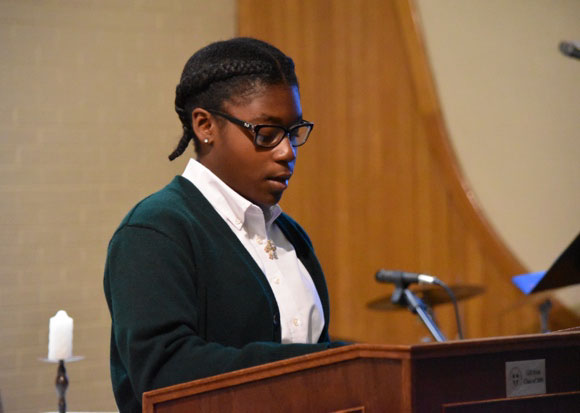 Be on your guard; stand firm in the faith; be courageous; be strong. –1 Corinthians 16:13

Never be lacking in zeal, but keep your spiritual fervor, serving the Lord. –Romans 12:11

Señor Juan Gonzalez, Boston Trinity Academy's Language Department Chair, began his Chapel address last week by referring to the talk he gave one year ago. At that time he reminded us that the way we act is more important than the way we look – even though society tries to make us believe the opposite. Last Thursday, Señor Gonzalez wanted to speak about something else very important: Just Keep Swimming.

Now it was the governor's custom at the festival to release a prisoner chosen by the crowd. At that time they had a well-known prisoner whose name was Barabbas. So when the crowd had gathered, Pilate asked them, "Which one do you want me to release to you: Barabbas, or Jesus who is called the Messiah?" For he knew it was out of self-interest that they had handed Jesus over to him.

While Pilate was sitting on the judge's seat, his wife sent him this message: "Don't have anything to do with that innocent man, for I have suffered a great deal today in a dream because of him." But the chief priests and the elders persuaded the crowd to ask for Barabbas and to have Jesus executed.

"Which of the two do you want me to release to you?" asked the governor.

"What shall I do, then, with Jesus who is called the Messiah?" Pilate asked. They all answered, "Crucify him!"

"Why? What crime has he committed?" asked Pilate. But they shouted all the louder, "Crucify him!"

When Pilate saw that he was getting nowhere, but that instead an uproar was starting, he took water and washed his hands in front of the crowd. "I am innocent of this man's blood," he said. "It is your responsibility!"

All the people answered, "His blood is on us and on our children!"

Then he released Barabbas to them. But he had Jesus flogged, and handed him over to be crucified.

Let the morning bring me word of your unfailing love, for I have put my trust in you.
Show me the way I should go, for to you I entrust my life. –Psalm 143:8

Boston Trinity senior Julyssa Castro encouraged fellow students by telling her own story in Chapel last week. Julyssa asked her listeners to imagine a woman in a department store, having accidentally knocked over a shelf of breakable items, on her knees in embarrassment trying to clean up the mess. She then asked everyone to imagine the store manager coming alongside, telling the woman his staff would clean up the mess, and beyond that, the store insurance would cover the cost of the damage. "Now imagine God doing that for you," Julyssa said. "Imagine trying to pick up all the broken pieces from all that life has thrown at you. They are all over the place, and there you are trying to pick them up and fix it yourself. But God says, 'Leave it.'"

“Be good, do good, and all good things will happen to you.” Mr. Caleb McClure, Director of Admission at Boston Baptist College, told Chapel listeners on March 4th and 5th that he was raised with this idea. “If you wanted the perfect life, you were good and did good things.” He spent the early part of his life trying to achieve this “perfection,” yet he admitted that he was not “the good kid.” He was good at “faking” while making poor behavioral decisions. Still, he was living with a foundation that said he could get the perfect life and he couldn’t figure out why it wasn’t working out for him.

“You don’t have to wait until you are an adult to change the world.” Regina Robinson, Dean of Student Affairs at Cambridge College, began her Chapel address last week with that encouragement to BTA students. She talked briefly about stories, the “Once upon a time…” variety we are all familiar with; she also spoke of Bible narratives. “You can be active participants in the story,” she said. “God can use you now just as he did children in the Bible. But in order for you to change the world, you have to understand God’s call on your life. You have the opportunity now to listen to the voice of God, to let the light that He has given you, shine.”