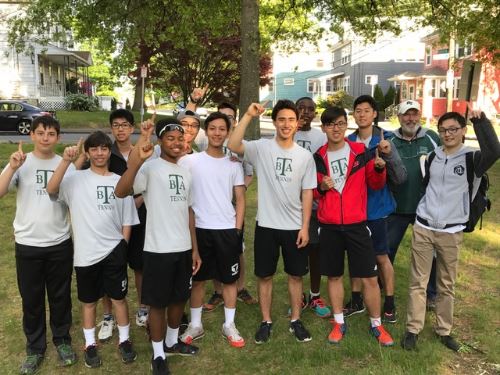 The Varsity Boys Tennis team clinched the best record in the MBIL on Wednesday, earning them the league title. They finished 8-2 after defeating Boston University Academy 3-2. Isaiah Goldsmith '19 won his match 8-7 (9-7 in tiebreaker) after being down double match point to provide the winning margin.

At the spring sports awards, Lio Wang '17 was named MVP, after going 10-0 in his matches. The Coaches Award for leadership, spirit, and sportsmanship went to Alex Lee-Papastavros '17.

During the ceremony, Coach Bill Fiolek emphasized how far the team has come. "Two years ago, our record was 0-10. Last year, we finished 3-7."

At the beginning of the year, Coach Fiolek shocked the team with what might be considered a rude surprise. Traditionally, the first practice of the year is a pizza party. This year, when the team arrived, they opened the boxes to find no pizza, just a handwritten message: "The taste of victory is more satisfying than pepperoni."

Now, the team is savoring that flavor. Congratulations to the BTA Boys Varsity Tennis team!

Seeing God's Work in Chinatown
Spiritual Discipline Lessons from the Junior Class
What do you Want to Be? That is the Question.
Why do Homework Well?
The Global Gospel
The Importance of a Vital Relationship with Jesus
Honors Society Hosts Dr. Anthony Artuso
The Messianic Secret and You